This weekend, the Holy Church commences a new liturgical year with the commencement of the season of Advent.

The liturgical season of Advent marks the time of spiritual preparation by the faithful before Christmas. Advent begins on the Sunday closest to the Feast of St. Andrew the Apostle (Nov. 30). It spans four Sundays and four weeks of preparation, although the last week of Advent is usually truncated because of when Christmas falls. (For instance, this year, the fourth Sunday of Advent is obviously on Sunday, and then that evening is Christmas Eve.)

The celebration of Advent has evolved in the spiritual life of the Church. The historical origins of Advent are hard to determine with great precision. In its earliest form, beginning in France, Advent was a period of preparation for the Feast of the Epiphany, a day when converts were baptized; so the Advent preparation was very similar to Lent with an emphasis on prayer and fasting which lasted three weeks and later was expanded to 40 days. In 380, the local Council of Saragossa, Spain, established a three-week fast before Epiphany. Inspired by the Lenten regulations, the local Council of Macon, France, in 581 designated that from Nov. 11 (the Feast of St. Martin of Tours) until Christmas fasting would be required on Monday, Wednesday, and Friday. Eventually, similar practices spread to England. In Rome, the Advent preparation did not appear until the sixth century, and was viewed as a preparation for Christmas with less of a penitential bent.

The Church gradually more formalized the celebration of Advent. The Gelasian Sacramentary, traditionally attributed to Pope St. Gelasius I (d. 496), was the first to provide Advent liturgies for five Sundays. Later, Pope St. Gregory I (d. 604) enhanced these liturgies composing prayers, antiphons, readings, and responses. Pope St. Gregory VII (d. 1095) later reduced the number of Sundays in Advent to four. Finally, about the ninth century, the Church designated the first Sunday of Advent as the beginning of the Church year.

The Catechism stresses the two-fold meaning of this coming : When the Church celebrates the liturgy of Advent each year, she makes present this ancient expectancy of the Messiah, for by sharing in the long preparation for the Saviour’s first coming, the faithful renew their ardent desire for His second coming (No. 524).

Despite the sketchy history behind Advent, the importance of this season remains to focus on the coming of our Lord. (Advent comes from the Latin adventus, meaning coming.) The Catechism stresses the two-fold meaning of this coming : When the Church celebrates the liturgy of Advent each year, she makes present this ancient expectancy of the Messiah, for by sharing in the long preparation for the Saviour’s first coming, the faithful renew their ardent desire for His second coming (No. 524).

Therefore, on one hand, the faithful reflect back and are encouraged to celebrate the anniversary of the Lords first coming into this world. We ponder again the great mystery of the incarnation when our Lord humbled Himself, taking on our humanity, and entered our time and space to free us from sin. On the other hand, we recall in the Creed that our Lord will come again to judge the living and the dead and that we must be ready to meet Him.

A good, pious way to help us in our Advent preparation has been the use of the Advent wreath. (Interestingly, the use of the Advent wreath was borrowed from the German Lutherans in the early 1500s.) The wreath is a circle, which has no beginning or end: So we call to mind how our lives, here and now, participate in the eternity of Gods plan of salvation and how we hope to share eternal life in the Kingdom of Heaven. The wreath is made of fresh plant material, because Christ came to give us new life through His passion, death, and resurrection. Three candles are purple, symbolizing penance, preparation, and sacrifice; the pink candle symbolizes the same but highlights the third Sunday of Advent, Gaudete Sunday, when we rejoice because our preparation is now half-way finished.

The light represents Christ, who entered this world to scatter the darkness of evil and show us the way of righteousness. The progression of lighting candles shows our increasing readiness to meet our Lord. Each family ought to have an Advent wreath, light it at dinner time, and say the special prayers. This tradition will help each family keep its focus on the true meaning of Christmas. In all, during Advent we strive to fulfil the opening prayer for the Mass of the First Sunday of Advent: Father in Heaven, … increase our longing for Christ our Saviour and give us the strength to grow in love, that the dawn of His coming may find us rejoicing in His presence and welcoming the light of His truth. 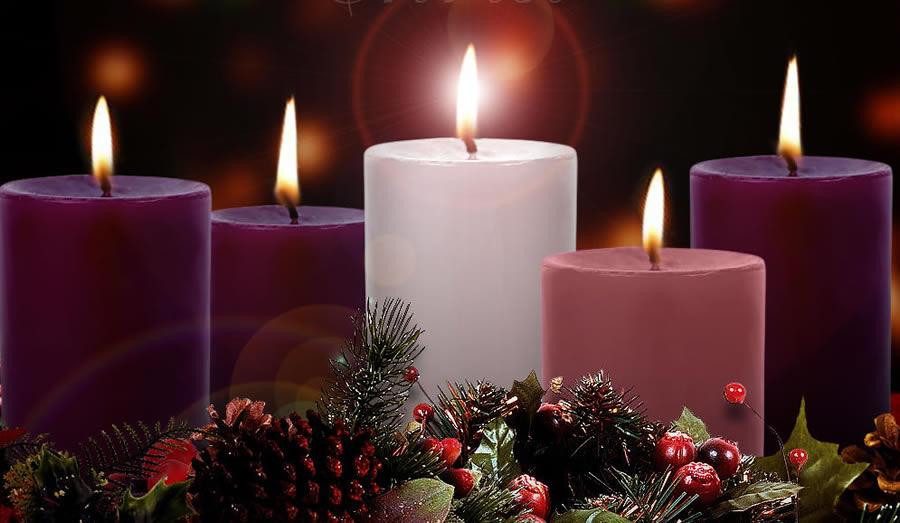